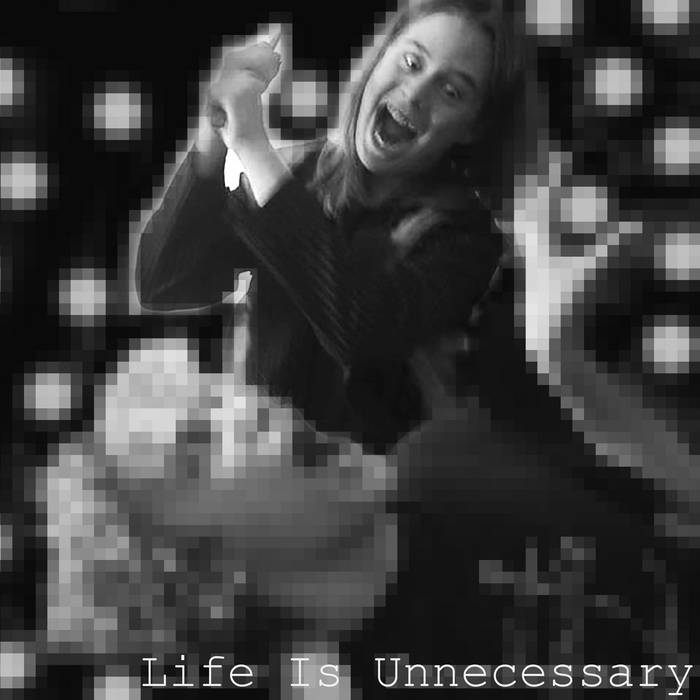 Life Is Unnecessary was the debut album from my "satirical Satanist black metal band," [Redacted] and the [Redacted] Sinners. The band name was meant to be a pun on my Scandinavian deadname.

This formation of the band played live three times, and was the first time that any band I was in performed at a local show. Our first concert was at The Post near Mandan, ND in the summer of 2005 when I was thirteen. We were a trio: vocals, one guitarist, and a drummer. Our first set consisted of only a few of the earlier songs, like "Self-Righteous Bigot," with some cover songs including Captain Beefheart's "The Dust Blows Forward 'N' The Dust Blows Back."

My outfits for these shows consisted of sequin or leather pants, a women's blazer with no shirt underneath, red suspenders, a girl friend's underwear, and my trademark red pitchfork cape with a stuffed devil's tail that I would whip around.

Our second show was in January, 2007 shortly before my fifteenth birthday. We had expanded to a quintet, and had learned more of the songs and several covers. We played in Mandan to almost no one. My brother, mom, and uncle were there, as well as a band from Minot and Williston whose members we would get to know about six-and-a-half years later. Some video footage of this show exists.

The week after my brother's sudden death in early February, 2007, we played our third and final show at the VFW in Bismarck. Other members of the band said we could call it off if I wanted but I told them I needed to play the show. It turned out to be well-attended and we were much more prepared. The shock of Web's death continued to resonate through my body.

I don't remember much from the night of the performance. I can still see and feel the memory of being surrounded by the crowd. I was dizzy from grief, excitement, and the physical exertion that comes from the inability to catch your breath when you're yelling.

"In Heaven," I screamed, "everything is fine."

When we played our cover of Rage Against the Machine's "Freedom," I could feel the walls moving. The crowd pulsed beside me. I still think it's one of the best shows I've ever played. And I'm still sick from grief.

Life Is Unnecessary was recorded between July 2003 and June 6, 2006. It was initially "released" among friends on CD-R on 6/6/06. The album was recorded and mixed in Sonic Foundry ACID Pro 3.0 and Magix Samplitude. Nearly all of the original WAV files were lost. This digital version is slightly altered and was mastered mostly from MP3s on November 15, 2020, and published on December 4, 2020.

Thanks for subscribing on Bandcamp, Jacob.